An Education for its Own Sake

“Liberal education, as we have understood it, is the cultivation of the mind with no other end than the truth itself.”
— Dr. Ronald P. McArthur
Founding president, Thomas Aquinas College

Despite the skepticism and utilitarianism of our time, Thomas Aquinas College holds firmly that the human mind can come to the truth about reality. Further, it is our conviction that some knowledge is worth pursuing for its own sake — not for any use we might make of it — and that it is intrinsically good to satisfy our desire to know the world and its creator in as determinate a way as possible.

To understand this, one must distinguish between two kinds of knowledge: practical and theoretical. Practical knowledge, as the term suggests, is ordered to practice, or action, to knowing how to do something. For instance, if one wants to know how to build bridges, he will pursue a course of studies in engineering. If one wants to know how to heal the sick, she will go to medical school. If someone wants to practice law, however, he certainly won’t take courses in either of these fields because they will not be useful to him. 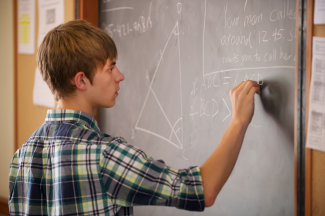 Even while offering an array of majors such as these, some colleges and universities have what is called a core curriculum, which is required of all students prior to their enrolling in some specific major. Offered in the core curriculum are courses in fields such as literature, history, and philosophy, knowledge of which is not needed for building bridges or for healing the sick, but which is thought nevertheless to be important in itself for students to have.

At Thomas Aquinas College, our one, integrated curriculum is our core. Every course in it is studied not for the use that can be made of the knowledge gained in the pursuit, but because what is learned answers the deepest question in us, the question “Why?”

To take an example, every high school student knows the Pythagorean Theorem — that in a right-angled triangle the squares on the sides of the triangle taken together equal the square on the hypotenuse. Put symbolically, A2 + B2 = C2. And that knowledge can be quite useful. But that is a very different thing from knowing why this should be so. As freshmen, students at Thomas Aquinas College work their way through The Elements of Euclid, the father of geometry, and come to master the proof for the Pythagorean Theorem. They are rewarded with learning why it is so.

Likewise, by faith, we know that the human soul is immortal. But do we know why? In studying Aristotle’s treatise On the Soul, the College’s sophomores come to understand the soul and can give a rational proof that, by its nature, it must be immortal. Again, our faith teaches that God exists. But can His existence be proven? Seniors at the College study Aristotle’s Physics and Metaphysics, and can prove by reason not only that a Supreme Being exists, but that He has certain attributes.

Knowledge such as this is theoretical, something to be desired for its own sake, in which the student can rest and take great satisfaction — even delight — in knowing. Indeed, it is in grasping the truth about creation and its Author that we find great fulfillment as human beings.

“Any system of electives which ignores the unity of knowledge and the overall purpose of life confuses the student rather than perfects him in truth.”