A Great Apostle for Philosophy

Why We Study Plato

Note: The following remarks are adapted from Dean Brian T. Kelly’s report to the Board of Governors at its October 21, 2011, meeting. They are part of an ongoing series of talks in which Dr. Kelly explains why the College includes certain authors in its curriculum. 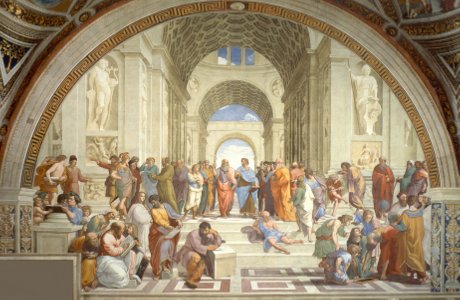 Plato was born in Athens in the late 5th century B.C. He was descended from Athenian monarchy, and as a young man fancied himself destined for a political career. But he met a street philosopher named Socrates and fell into his circle of adherents. This encounter changed his life forever; from then on he committed himself to living out the call to philosophy. He founded the Academy, a school devoted to philosophy through an intense formation in mathematics. His most famous pupil at the Academy was Aristotle.

Socrates lived philosophy and never made any attempt to write a book. Plato, fortunately, did not follow his example, though he shied away from composing treatises proclaiming his views. Instead he wrote dialogues, mostly featuring Socrates, which record or invent serious and extended discussions on great themes such as justice, courage, the immortality of the soul, etc. These dialogues present timeless questions in a vibrant and dramatic mode. It was as though he recognized the impact that Socrates had on his own life, and he wanted to make it possible for others to have their own encounter with his teacher.

There are many masterpieces in the collection of these dialogues. The Republic, The Symposium, Phaedrus, Thaeatetus, Meno and, of course, the Apology. I could name several others, but I want to single out one work, the Gorgias. In this dialogue the discussion begins by focusing on rhetoric, but inevitably turns to the question of justice. Socrates always saw this as the great and pressing question. This dialogue presents a marvelous window into the fundamentals of Natural Law. It is especially evident here that Socrates cares deeply about the people with whom he contends, however violently they reject him.

These dialogues continue to challenge modern readers and awaken in them a sense that reason matters and should govern their actions. Plato’s encounter with Socrates stirred in him the seeds of his philosophic vocation. Many of today’s influential Catholic thinkers would freely admit that the choice to pursue the true, the good, and the beautiful was fundamentally effected by their own encounter with Socrates in the dialogues of Plato. Thomas Aquinas College myth and lore has it that founding president Dr. Ronald P. McArthur turned to philosophy under the influence of this great character.

An Introduction to Philosophy

Why is Plato featured so prominently in the initial stages of our philosophy sequence? Are we not Thomistic and therefore Aristotelian? Should we not give pride of place to Aristotle rather than to Plato, who represents a fundamental alternative to the Aristotelian view of reality?

Late Thomas Aquinas College founder Marcus A. Berquist addressed this question saying that these dialogues “are intended as an introduction to philosophy ... through the representations and arguments in these dialogues, one is made explicitly aware of the supreme good of searching for and living by the truth, and of coming to true knowledge rather than being satisfied with plausible opinions.”

In these works we encounter true philosophical discourse. In these discussions Socrates leads his interlocutors, by way of questions, to see the truth lying hidden in their own opinions. They want to say that justice is the advantage of the stronger, but he leads them to see that when the stronger man takes advantage of the weaker man he is actually harming himself. They want to say that happiness consists in continually satisfying sensual appetites, but he leads them to see that such license will only make them wretched. What is remarkable is that he leads them to see that their own views compel them to these conclusions. He asks them little questions that produce big distinctions. By their own answers they refute themselves. Sadly, it is rare that they accept their self-refutation with the appropriate graciousness.

You can see that this is a wonderful introduction to the life of the mind, where we have to step back from rhetoric and our own desires, and seek the answers to the great questions by building up from little questions and proceeding by baby steps. It is a very appropriate introduction to the life ordered to truth, in that it presents quite powerfully the need to let go of our pride. To fully submit to truth we must reject all egoism. When the argument shows us we are wrong we must be prepared to humbly admit our error. Humanly speaking this is difficult, and it is helpful to see how wrong Socrates’ interlocutors are, and how foolish they appear, when they refuse to grant that they have erred.

The sequence of dialogues read at the beginning of freshman year ends with an account of Socrates’ trial, imprisonment, and execution. Here we learn that Socrates is not living the life of dialectic for the sake of fame or attention. He is so committed to reason that he is prepared to die rather than depart in any particular from what reason tells him is the just way. He lived as something of a public conscience, arguing with his fellow citizens that they should care more about virtue than about money, or power, or any other passing good. He asked people what they understood, and then examined their claim to see if they really knew what they thought they knew. Almost universally he showed that what was proclaimed as knowledge was actually on much shakier ground.

In showing his fellow Athenians that their “knowledge” was really a kind of ignorance, and that they were committed to vain pursuits, he grew very unpopular. With hindsight his execution on trumped-up charges appears inevitable.

After his conviction Socrates’ friends arranged to buy his way to safety in exile. But Socrates refused to cooperate since it would undermine the laws of the city. Even though his sentence was manifestly unjust he would do nothing to harm the rule of law. He argued that committing an injustice is much worse than suffering an injustice. He would rather die than depart from the argument. Plato experienced these things firsthand and was never the same after. It is impossible not to admire Socrates’ courage and equanimity; it is hard to resist the courage and conviction of the martyr. Plato’s Socrates is a great apostle for philosophy.

But what about the conflict between Aristotle and Plato? Are they not diametrically opposed? Samuel Taylor Coleridge once said that “every man is born an Aristotelian or a Platonist.” This certainly implies a radical difference. Think also of the famous Raphael painting, The School of Athens, where Aristotle and Plato stand next to each other; Aristotle turns his hand to the ground while Plato points upwards. Doesn’t this also suggest a great divide? If they are so opposed, how can the study of the one appropriately introduce the study of the other?

It is true that there are serious disagreements between the two. Plato thought that all knowledge was recollection, that the soul was imprisoned in the body, that a common or universal name depends on the existence of a separately existing form, etc. Aristotle did find fault with him on these points. But this is to single out the ways that the student surpasses the teacher. There was much that they held in common; for example, that friendship is a precious good, though truth is greater than friendship. And they were indeed friends. Aristotle owed to Plato the deep formation and education that allowed him to penetrate more deeply the mysteries of God and creation. In his Metaphysics Aristotle even refers to himself as a Platonist. Although in Raphael’s painting they strike different poses, they are still standing side by side and looking to one another.

In Plato’s dialogues, and especially in the character of Socrates, we experience philosophical wonder in its burst of youthful vigor and enthusiasm. He attacks the great questions with bravery and hope, though he has trouble settling his mind that he has reached any fixed conclusions. Arguments are unfurled in strikingly dramatic contexts. They are stories at the same time as they are philosophy. The dramatic element makes these works well proportioned to the young.

But youth either burns out or matures. In Aristotle we have Plato’s youthfulness brought to a kind of maturity. The dialectic is still there, though not in a dramatic or personal presentation. In Aristotle’s treatises the give and take of the argument concludes with an answer; the mind settles. He builds from natural science to metaphysics with a rigorous caution about the limits of each science. There is delight and satisfaction here but not of the youthful, dramatic sort. This would not be an appropriate place to start with the young. They are much better off first encountering in Socrates “the supreme good of searching for and living by the truth.”

As we grow and mature we want to maintain the dreams of our youth; we want to keep alive as much as possible the vision of the child. It is very good to begin with Plato, but it is also important for us to return to him again and again and to be refreshed.