Note: The following remarks are adapted from Dean Brian T. Kelly’s report to the Board of Governors at its May 15, 2015, meeting. They are part of an ongoing series of talks about why the College includes certain authors in its curriculum. 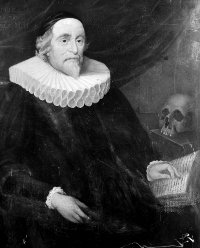 Historians count William Harvey as one of the crucial figures of the scientific revolution, which lasted from about the time of Copernicus until Newton, roughly the 16th through the early 18th centuries. His discovery that blood circulates through the body is one of the most important in medical history. He was a contemporary of Galileo, Francis Bacon, Descartes, Hobbes, Kepler, Gilbert, and Boyle, and knew many of them personally. Indeed, he was a fellow student of Galileo’s at the University of Padua and was Bacon’s personal physician.

Harvey was a liberally educated and well trained doctor. He studied the classics deeply and was granted medical degrees from both Cambridge and Padua. He began a very successful medical practice in London, where in 1615 he was also granted the prestigious position of Lumleian lecturer on human anatomy. In 1618 he was appointed physician to King James I and later served in the same role for Charles I. He even helped to rescue the royal family during the Battle of Edgehill in the English civil war. He kept copious notes on his anatomical observations through dissection and experiment. In 1628 he published a relatively short book called On the Motion of the Heart and Blood in Animals. There was significant resistance to his claims in the medical community, and it is even said that his practice suffered because his reputation was immediately tarnished. But this treatise won him a place as one of the great figures in the history of medicine.

In our freshman Natural Science tutorial we read this book along with his later Anatomical Exercises on the Generation of Animals.

Because he is closely associated with this historic explosion of scientific development, Harvey is often hailed as a modern who helped to free the world from the shackles of superstitious allegiance to scholasticism and Christianity. Indeed, you can get a sense of this by looking to the edition of his work on the motion of the heart and blood that we use. If you look inside you will notice that it is put out by Prometheus Books, a company committed to publishing in the areas of “atheism, humanism, and critical thinking.” But on closer inspection this view cannot stand.

Take for example the following passage from his Exercises: “We acknowledge God, the supreme and omnipotent creator, to be present in the production of all animals, and to point, as it were, with a finger to his existence in his works” (Exercise 54). By shedding light on the works of nature, Harvey saw himself as illuminating God’s handiwork.

Although modern science tends to be viewed in sharp contrast to Aristotle and the scholastics, Harvey certainly saw himself as a scientist in the traditional mold of Aristotle. The reintroduction of Aristotle’s treatises to the Western world in the 12th and 13th centuries generated significant interest in natural science. Yet even though Aristotle was one of history’s greatest natural philosophers, he was still subject to the limitations of his time and observations. Scientists in Harvey’s time had tools that Aristotle did not, e.g., Galileo’s telescope. So while Aristotle laid out very sound general conclusions in natural philosophy, many of his more particular conclusions were highly speculative and even mistaken. We now know, for example, that there are more than four basic elements, and that bodies of different weight fall at practically the same speed.

Part of the difficulty with Aristotle’s genius and consequent authority was that lesser minds adhered to him and his conclusions slavishly. This was not true of Harvey. Although many of his scientific confreres simply rejected Aristotle, Harvey studied him carefully as a master, accepting his general principles and methodology. He was not so foolish, however, as to think that Aristotle could make no mistakes when it came to particular conclusions. This is very clear from the beginning of Harvey’s Anatomical Exercises on the Generation of Animals. One of the very first things he does is to reject an Aristotelian conclusion as “erroneous and hasty.” But this is quickly followed by a careful treatment of the “one road to science,” which draws heavily on Aristotle’s logical and physical works. Harvey says that we must proceed “from things more known to things less known … and universals are principally known to us, science springing by reasonings from universals to particulars; still the comprehension of universals by the understanding is based upon the perception of individual things by the senses.”

So for Harvey, as for Aristotle, the true natural scientist must be prepared to make abstract arguments but must always root abstractions in thorough and careful observations. I highly recommend an excellent treatment of this question in an article by Dr. Herbert Ratner that can be found in the third volume of The Aquinas Review.

Matters of the Heart

Let me just present the briefest sketch of at least part of Harvey’s argument that the heart causes blood to circulate. The most influential view that he had to contend with was Galen’s notion that the liver and the heart both sent blood forth to the various parts of the body; the heart by way of the arteries, and the liver by way of the veins, where the blood was completely consumed. There was no notion of blood returning to the heart; it merely went forth and was used up.

Now Harvey contended, through many kinds of arguments and experiments, that this could not be an accurate account. One of the most striking was his observation that showed that the blood vessels are not occasionally but constantly filled with blood. He further observed and measured the quantity of blood that came forth in a pulse when an artery was cut. From this he was able to make conservative calculations that 540 pounds of blood passed through the arteries in one day. If the Galenic account was correct then the human body would have to produce and use up 540 pounds of blood each day. Could you imagine how much food and drink we would have to consume if we were required to produce 540 pounds of fresh blood daily? On the other hand, if the blood is moving in a circle, then the heart is pumping out the same blood over and over during the course of one day.

(Here I am reminded of the Confederate General John B. Magruder, who stymied General McClellan into a long and costly delay by marching his troops into camp in a circle. He marched them in and then snuck them out and marched them back in again.)

By means of ligatures Harvey was able stop the flow of blood in the arm. By blocking and then releasing the artery he was able to see that the artery carries blood toward the extremity of the arm. By blocking and releasing the veins he was able to show that the veins carry blood back from the extremities toward the heart. All of this gives a concrete sense of the circle or circuit of the blood’s motion. Harvey summarizes at the end of chapter eight, “The artery is the vessel which carries the blood from the heart to the body at large, the vein of the present day bringing it back from the general system to the heart; the former is the conduit from, the latter the channel to, the heart; the latter contains the cruder, effete blood, rendered unfit for nutrition; the former transmits the digested, perfect, peculiarly nutritive fluid.”

In teaching this portion of the natural sciences, we try to imitate Harvey’s approach by dissecting a sheep’s heart, which is large enough to show forth the principal chambers, vessels, and valves of the heart. Though it is not part of the syllabus, the students invariably find a spontaneous volunteer to perform the flow of blood experiment with a makeshift ligature. Usually one of the young men will remove his belt and put it around a classmate’s arm. Harvey is particularly interesting to us because he shows the fruitfulness of the perennial philosophy in natural science.