Why We Study Jane Austen’s Emma

“The Beauty of Truth and Sincerity”

Note: The following remarks are adapted from Dean Brian T. Kelly’s report to the Board of Governors at its February 17, 2015, meeting. They are part of an ongoing series of talks about why the College includes certain texts in its curriculum. 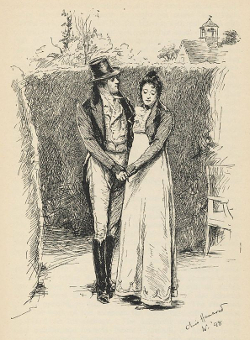 During the first semester our seniors read Jane Austen’s great novel Emma, wedged in between Immanuel Kant’s Critique of Pure Reason and George Friedrich Hegel’s Phenomenology of Spirit. This makes for an odd, somewhat disorienting sequence, and the “chick book” is not universally popular with the young men. It should be. Jane Austen’s novels are witty, suspenseful, charming, and eminently sensible. Her work is suffused with a wholesome, feminine sanity. My only regret is that we don’t have room in the seminar to require seniors to read Persuasion and Pride and Prejudice as well.

In 1775, with trouble brewing in the American colonies, Jane Austen was born in a quiet village of Steventon in old Hampshire, where she and her six siblings were homeschooled by their father, Rev. George Austen. She read extensively, admiring especially Samuel Johnson and Henry Fielding. Her biography is brief and fairly dull. She was not wealthy and she never married, though she was briefly engaged on one occasion. She wrote initially for amusement and then to pay the bills. Her first novels were published anonymously. She died young of an unknown illness. But still she is a literary giant and, from our perspective, one of the great authors of the Western world. She wrote six novels. All are excellent. At least three, if not all, of her works belong in the canon of the great books.

Quite simply she was a great writer. Though her plots are relatively simple, she has an amazing ability to build suspense and provide delightful twists and extremely satisfactory resolutions. Her prose is vivid and artful, her dialogue vibrant and alive. It might be a little surprising that one who died so young was even somewhat of a pioneer in narrative form. She is often mentioned as one of the earliest authors, along with Goethe and Flaubert, to use free indirect speech consistently. In free indirect speech the thought of a character is presented as though in the narrator’s voice. So, for example, instead of saying “She was shocked to learn that Mr. Elton did not love Harriet but was instead in love with her,” Austen says, “Without much apparent diffidence, Mr. Elton, the lover of Harriet, was professing himself her love.” This allows the reader to enter more immediately and naturally into the thoughts and feelings of the character.

Published 200 years ago this year, Emma is considered by many her greatest work, though an argument could easily be made for either Pride and Prejudice or Persuasion. In truth Emma is not everyone’s favorite, in part because the heroine is not always and in every way likeable. From the very beginning of the novel Austen is clear that in Emma’s short life she has had “too much her own way” and thinks “a little too well of herself” (Volume 1, chapter 1). Mr. Knightley, a dear friend of the family who has known Emma since she was a baby, bluntly calls her “spoiled” (V. 1, c.5). Emma was raised by a loving but somewhat silly father and a governess more prone to affection than discipline. Now come to womanhood Emma decides never to marry but to bless those around her by arranging marriages for them. The story revolves around Emma’s disastrous attempts along these lines. Mr. Knightley is the only person in Emma’s life who dares to offer her correction. To Emma’s credit she respects him for this and, though she conflicts with him from time to time, she usually takes his admonitions to heart.

For example, Emma offends an acquaintance, Miss Bates, at a picnic by suggesting that she is garrulous. Though Emma’s jibe is pointed, it is essentially correct. But while others in the party overlook Emma’s transgression, Mr. Knightley reproaches her as soon as he can do so privately. He says, “How could you be so unfeeling to Miss Bates? How could you be so insolent in your wit to a woman of her character, age, and situation? — Emma, I had not thought it possible” (v. 3, c. 7).

Miss Bates is socially, financially, and intellectually inferior to Emma and Mr. Knightley. But Mr. Knightley recognizes that superiority calls for compassion. Emma should see this but fails to act accordingly. He says, “I would not quarrel with you if she were your equal in situation — but Emma, consider how far this is from being the case. She is poor; she has sunk from the comforts she was born to; and, if she live to old age, must probably sink more. Her situation should secure your compassion. It was badly done indeed! — You, whom she had known from an infant, whom she had seen grow up from a period when her notice was an honour, to have you now, in thoughtless spirits and the pride of the moment, laugh at her, humble her, — and before her niece, too — and before others … (who) … would be entirely guided by your treatment of her. —This is not pleasant to you, Emma — and it is very far from pleasant to me; but I must, I will, — I will tell you truths while I can, satisfied with proving myself your friend by very faithful counsel.”

Emma grew angry at these words, but angry at herself. “The truth of his presentation there was no denying. She felt it at her heart. How could she have been so brutal, so cruel to Miss Bates?”

This is something remarkable. A clever, headstrong, somewhat spoiled young lady who is able to accept a scolding because she recognizes the goodwill with which it is offered and the merits of the complaint. We can’t love Emma for her flaws but we must love her for her contrition, her humility, and her self-awareness.

As the story progresses she comes more and more to love the truth and to shy away from anything that smacks of deceitfulness. We see her rejoicing in knowing that her previous behavior was foolish and hoping “that the lessons of her past folly might teach her humility and circumspection in future” (v.3, c. 18).

Perhaps the chief lesson of the novel is stated by Mr. Knightley, “My Emma, does not every thing serve to prove more and more the beauty of truth and sincerity in all our dealings with each other?” (v. 3, c. 15).

It is ironic that Hollywood is infatuated with Jane Austen, making and remaking movies from her novels, and even from her own scant life story. Jane Austen does not love what Hollywood loves. Hollywood loves passion and excess. In her stories Jane Austen shows forth the beauty of honesty and reasonable restraint; she vividly portrays the importance and dignity of reason in all aspects of human life, even matters of the heart. She makes her reader feel the weight of thoughtless transgression and the lovableness of courtesy and self-control.

In the College’s founding document, A Proposal for the Fulfillment of Catholic Liberal Education, the founders of Thomas Aquinas College say, “The greatest works of literature, insofar as they appeal to the imagination and move the affections, are peculiarly accessible to the young, while at the same time they present or imply profoundly important views of human life and of reality as a whole.”

We have moved past the MTV generation to the generation of smartphones and video-gaming. It may be more difficult for Jane Austen to appeal to the imagination steeped in these things. But wherever she is able to move the affections, her work promotes a profoundly healthy and sane view of human life and reality as a whole.