How Even Bad Books Can Still Be Great

Note: The following remarks are adapted from Dean Brian T. Kelly’s report to the Board of Governors at its May 14, 2010, meeting. They are part of an ongoing series of talks in which Dr. Kelly explains why the College includes certain authors in its curriculum.

At the last Board meeting, former Chairman Maria Grant proposed that I should say a few words at this meeting about why we read someone we dislike. I was struck by this as a very perceptive question. Why do we read the “bad guys?” 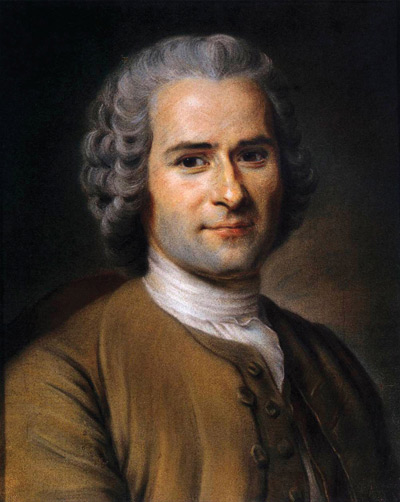 I remember speaking to a young man in 1984 who expressed disgust at Thomas Aquinas College because we read Karl Marx. He indicated he would never support an institution that promoted the founder of communism.

From a certain angle I could see his point: why should we, as educators, give someone a platform unless he is going to use it to speak truth? Why ask students entrusted to our care to read an author who will try to convince them of something fundamentally false? Do we not run the risk that we will lead them into error?

In the little time given to making the best possible beginning on the road to wisdom, it would seem to make more sense to read only the wisest and best authors. So why include the “bad guys?”

The Enlightenment’s Enfant Terrible
In this context Mrs. Grant suggested that I look especially at Jean Jacques Rousseau. Now Rousseau is an amazing character in the history of philosophy, politics, and even music. Because of his accomplishments in these diverse fields we might be tempted to call him a Renaissance man, but we would more appropriately call him an Enlightenment man. He lived an unsettled life in France and Switzerland in the mid-18th century. His works were widely read and explosively controversial.

And he certainly fits the “bad guy” description. This is manifest in our time from the writings of Pope John Paul II and Pope Benedict XVI, but also from the effects his thought has had on the world. (See “Truth and Freedom” by Cardinal Joseph Ratzinger, 1996.) Rousseau teaches important concepts that are fundamentally opposed to what we hold and wish to pass on to our students.

We recognize, along with St. Thomas Aquinas and Aristotle before him, that man is essentially a social and rational being. Man is superior to the brute beasts because he has the gift of reason. He can come to understand the world around him, and to know, in some way, God as the source of all that is good. And further, man is only able to be fully himself in a community of friendship. We also believe that man is naturally good, but is corrupted by sin and elevated by grace.

In his groundbreaking Discourse on the Origin of Inequality Rousseau rejects all of this. In this treatise he proposes that man is naturally good, but in the same way that a cow or a donkey is good. Man, in the state of nature, gives no thought to anything other than his hunger and thirst and his physical desires; he is not really a rational animal. In one striking text Rousseau says that “the man who meditates is a depraved animal” (Discourse, part one). Natural man eats what is at hand and sleeps wherever and whenever he grows tired. Since nothing belongs to him or anyone else there is no such thing as injustice. So man in all his goodness cannot be guilty of any transgression until he develops some notion of private property. But somewhere along the line man was corrupted in stages. He was first corrupted by marking off a plot of land as belonging to himself. He was further corrupted when he began to exercise foresight and to formulate words and speech. When he developed arts and sciences his corruption was so far complete that man could never hope to be restored to the goodness of nature.

Notice that on this view man is not naturally social, but only retains his natural goodness when he avoids human ties. And while Aristotle and Aquinas recognize the goal of human life and existence in the divine gift of reason, Rousseau claims that man has lost his natural birthright by developing his reason. This position is striking and alarming. He seems to propose that it is tragic that we have separated ourselves from a merely animal existence.

So Why?
But even though we passionately disagree with this view, we ask our students to read it and to take it seriously. Why?

On the surface there are some easy but important things to say. Rousseau matters because he had a large effect on the world in both its thinking and the unfolding events of history. He is one of the bright lights of the Enlightenment which pushed modern man toward deism and away from Christianity. His developments in political philosophy helped to produce good and bad fruits, as it both influenced the founders of our nation and helped to stir France into an ugly and deeply anti-religious revolt.

His influence has even been cited in the animal rights movement and the hippie communitarianism of the 1960s and early ‘70s. Without understanding Rousseau it is very difficult to understand the world around us, or even ourselves as children of the modern world.

Furthermore, if we think about his account of the natural man, it is clear that he is answering some of the greatest questions that can occupy our minds: what is man? what is his purpose in life? These are timeless questions. These are questions that we have to address if we aim at liberal education. But still, why not stick with the authors who answer these questions in the way that we think best?

This touches on a fundamental principle of our pedagogy: we learn best when we take into account different and opposing arguments. We do not make good judgments, intellectual or practical, when we avoid conflict.

This is a very general claim. It lies at the heart of our legal system, where a good ruling is deemed to rest on a vigorous prosecution and defense. A good CEO knows this and urges advisors to speak their minds freely rather than be “yes men.” We all recognize this principle when we sit down to make “pro” and “con” lists. When the Church considers a candidate for canonization, She appoints a “devil’s advocate” to make sure that all sides of the question are duly weighed. Our patron and model, St. Thomas Aquinas, took this principle so much to heart that he began to address every issue by first developing strong arguments opposed to the correct answer.

So Rousseau is in fundamental opposition to us; it is important that our students not shy away from this but rather take it head on, reading and savoring his words and ideas, not lightly dismissing him, but examining the merits of his claims and arguments.

It should be obvious that such an approach places a tremendous confidence in our students. We trust that sober and careful reason is not lightly led astray, especially when it is bolstered by the blessing of Faith. Thus class does not begin with the tutor instructing the students that Rousseau is badly mistaken. Rather, we examine his arguments, in his own words, in the context of a serious discussion and with the Faith as a guiding light.

Sound Judgment
I  should point out that our method has the added benefit that it is open to learning even from those who are mistaken or misguided. This takes us a little past the “good guys/bad guys” labels.

Here, for example, when we judge that Rousseau has erred, we want to see why he went astray and what truth is mixed in with his error. He suggests that the development of the arts and sciences is a corruption of man’s natural irrationality. I think this is gravely wrong, but are there limits to the integrity and benefits of such developments? Is every advance in science and technology a good? Could Rousseau have had in mind the development of gunpowder and the flintlock musket, for example, as a scientific advance which did not in every way advance the cause of human well-being? In our own time we might ask about developments in cloning, or germ warfare, or reproductive technology.

By reading the great books our students are presented with vigorous and sometimes conflicting arguments about the greatest questions. They are in a better position to make an understanding judgment because they have examined the issue from all sides. So to say that we should not read an author because he is wrong is like the judge saying the accused is guilty so the jury should not hear his defense.