Doctor of Grace: Why We Study St. Augustine 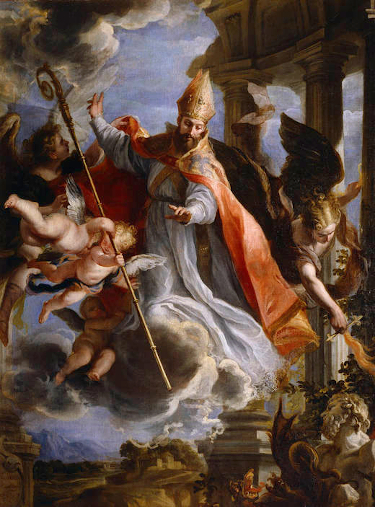 The following remarks are adapted from then-Dean Brian T. Kelly’s report to the Board of Governors at its May 12, 2017, meeting. They are part of an ongoing series of talks about why the College includes certain texts in its curriculum.

If you look at the beautiful façade of Our Lady of the Most Holy Trinity Chapel, you will find three statues. Our Lady sits atop the peak, but two men flank the main entrance, St. Thomas Aquinas and St. Augustine. A youthful St. Thomas is lost in wonder at the divine mysteries he writes about; an aged St. Augustine is preaching to the end. St. Augustine was ultimately called to the episcopate, whereas St. Thomas was able to devote himself, more or less completely, to the life of prayer and contemplation.

It is fitting that these two great doctors of the Church stand side by side appearing to support the edifice on which Our Lady stands. They are the two greatest theologians the Church has ever known; their teaching has laid a sure foundation for what Pope St. John Paul calls “the very logical and demanding edifice of Christian doctrine.”

St. Augustine’s influence can be seen concretely in the Catechism of the Catholic Church, where he is cited more than any other “ecclesiastical writer” by a wide margin. He is cited 87 times. St. Thomas comes in second with 61. No one else comes close. For obvious reasons I cannot bring myself to agree with my old teacher, Rev. John Hardon, S.J., when he says that Augustine is “the greatest Doctor of the Church,” but second best is not too bad.

Like St. Thomas, Augustine wrote voluminously on all aspects of Christian theology. Unlike St. Thomas, most of what he wrote was polemical in nature, answering particular objections to the Faith or addressing particular heresies. His great City of God, for example, was written to address the objection that Rome had fallen to barbarian invaders because the empire had abandoned her official pagan practices. And several smaller treatises on free will and grace constitute his carefully teased out response to the lure of Pelagianism. For this great work in particular, Augustine was named the Doctor of Grace and is even referred to by this title in the Catechism.

In the history of the Church there have been many heresies. It is somewhat striking how many there were in the first few centuries after Christ. But when heresies arise the faithful teachers and thinkers are called on to address these serious errors by looking more deeply into the deposit of faith. This is the great benefit of heresy, that the heretic raises a great question in a new way. We have to be especially grateful to those who have answered error with truth. St. Augustine, especially after his reluctant vocation and selection as the Bishop of Hippo, was a very important figure in combatting Manichaeism, Pelagianism, Donatism, and Arianism.

St. Augustine forms the backbone of our Sophomore Theology sequence. Here we begin with his small treatise On Christian Doctrine, which provides the principles for reading and interpreting the Scriptures. Here the students learn the generous and expansive rule of charity, which holds that any interpretation of God’s word that builds up charity should not be rejected. After all, the Holy Spirit is the ultimate author of Scripture, and in His infinite wisdom He can intend a multitude of meanings for any one passage.

Our sophomores also read several of Augustine’s shorter treatments of grace and nature in response to the Pelagian heresy. Here he gives a careful reading of the Pauline epistles to show that every good thing we have is received as a gift, and is not exclusively or autonomously ours. This even applies to our meritorious actions; God works it in us to freely choose the good. The only things in our lives that are truly and exclusively our own are the sins that we commit and the wicked habits that we form. In all else we are cooperating with God’s grace.

A good deal of time is then spent reading the City of God, tracing the arc of salvation history, beginning with the first words of Genesis and ending with the book of Revelation. In many of these pages Augustine meditates on the peculiar nature of pride as the most insidious of temptations. It is the one that always accompanies good action, and it is the secret door through which good men are corrupted. He speaks as one familiar with this temptation.

But the most influential of his works that our students read, perhaps his single most influential book, is his Confessions. If you asked a number of Thomas Aquinas College alumni what book from all four years had the most significant impact on their lives, I suspect the majority would name this book. It strikes at the heart and conscience of the good-willed reader. In it, Augustine humbly relates the story of his life in the form of an extended prayer. He confesses his own shortcomings and God’s many blessings. It is in many ways a model of Christian prayer. He speaks frankly to the Lord with intimacy, love, and reverence. Pope St. John Paul calls this “a work in which those who thirst for truth and know their own limitations have always discovered their own selves.”

St. Augustine was born in 354 in what is now Algeria. His mother, Monica, was Christian and is now recognized as a saint. His father, Patrick, was neither Christian nor saintly and hence Monica is sometimes considered the patron saint of abuse victims. Augustine was not baptized but learned about Christ from his earliest days. As a youth he pursued a serious classical education — and worldly vanity. Augustine, the confessor, wrestles with the mystery of evil as he recalls stealing pears from a farmer’s tree without any intention of eating them, but only for sinful fellowship with his ruffian friends. His mother grieved for him as he grew further and further away from the Faith and more enmeshed in the world. He fell into sexual sin and fathered a son.

St. Monica, model of maternal persistence, prayed constantly for him, hounding him sometimes to the point of distraction. He sheepishly confesses that when he decided to move from Carthage to Rome he lied to his mother about it so that she wouldn’t follow him. Once when Augustine was adhering to the doctrines of the Manichaeans, Monica almost despaired but received a vision to encourage her prayers. And another goodly bishop assured her, “It cannot be that the son of these tears should perish.”

In many ways the story of Augustine’s conversion revolves around two opposing forces, the millstone of sinful habit and the immense power of a mother’s love.

As Augustine overcame his intellectual doubts, he remained trapped by the pleasures of the flesh. His famous prayer was, “Lord make me chaste, but not just yet.”

He felt powerless to release himself and slow to desire freedom. He says:

I no longer had my usual excuse to explain why I did not yet despise the world and serve you, namely, that my perception of the truth was uncertain. Now I was indeed quite sure about it. Yet I was still bound down to the earth. I was refusing to become your soldier. … The burden of the world weighed me down with a sweet drowsiness. … The thoughts with which I meditated about you were like the efforts of those who would like to get up but are overcome by deep sleep and sink back again. … The law of sin is the violence of habit by which even the unwilling mind is dragged down and held, as it deserves to be, since by its own choice it slipped into the habit. “Wretched man that I was, who would deliver me from this body of death other than your grace through Jesus Christ our Lord?”

After many struggles his inner conflict comes to a crisis.

From a hidden depth a profound self-examination had dredged up a heap of all my misery … that precipitated a vast storm bearing a massive downpour of tears … I threw myself down under a fig tree and let my tears flow freely … a sacrifice acceptable to you … I repeatedly said to you: “How long O Lord? … how long is it to be? Tomorrow, tomorrow. Why not now? Why not an end to my impure life this very hour?”

While Augustine was thinking this, he heard a child’s voice from a nearby yard saying, “Pick up and read. Pick up and read.” Inspired, he picked up his Bible and opened it at random, “and in silence read the first passage on which my eyes lit: ‘Not in riots and drunken parties, not in eroticism and indecencies, not in strife and rivalry, but put on the Lord Jesus Christ, and make no provision for the flesh in its lusts.’ (Romans 13:13-14). … It was as if a light of relief from all anxiety flooded into my heart. All the shadows of doubt were expelled.”

During Augustine’s many years of waywardness, Monica persevered in prayer; she believed and hoped that God would claim her son in the end. What joy she felt when Augustine told her of his inward conversion and his desire for baptism! “She exulted … and blessed you who ‘are powerful to do more than we ask or think.’ (Eph. 3:20).”

In truth Monica rejoiced to see her beloved son baptized, but this triumph came very shortly before the end. After his baptism she traveled with her son to Ostia, by the mouth of the Tiber, where she breathed her last. But Augustine describes a beautiful moment of deep spiritual communion with his mother. He says, “Step by step we climbed beyond all corporeal objects and the heaven itself. … We ascended even further by internal reflection and dialogue and wonder at your works … and while we talked and panted after [the eternal], we touched it in some small degree by a moment of total concentration of the heart. And we sighed and left behind us ‘the first fruits of the spirit’ (Romans 8:23).”

In that moment Augustine says, “We attained the eternal wisdom which abides beyond all things, … and this world with all its delights became worthless to us.” Before Monica died she told him, “My hope in this world is already fulfilled. The one reason why I wanted to stay longer in this life was my desire to see you a Catholic Christian before I die. My God has granted this in a way more than I had hoped.”

You can see why she is a patron saint of mothers and why Augustine was so heartbroken when she died a few short weeks later. What a great blessing it was for Augustine to have a mother so devoted to his conversion and salvation. And what a blessing to the Universal Church her prayers have turned out to be.

I have touched on just a few central moments in one of the most beautiful and enriching books ever written. St. Augustine and St. Monica, please pray for us and for all wayward souls and their anxious mothers.