Note: The following remarks are adapted from Dean Brian T. Kelly’s report to the Board of Governors at its February, 2014, meeting. They are part of an ongoing series of talks about why the College includes certain authors in its curriculum. 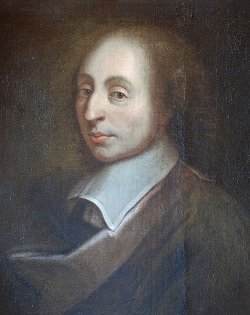 Although he lived only 39 years, Blaise Pascal is regarded one of the most brilliant mathematicians and scientists of all time. He might also be considered a poster child for homeschooling. After his mother, Antoinette, died, Blaise’s father, Etienne, oversaw his education personally, and the results were astonishing.

When the teenage Pascal published a treatise on conic sections, eminent geometers suspected that the elder Pascal had ghostwritten it. Their doubts evaporated over the subsequent years as Blaise made remarkable discoveries and innovations, not only in geometry, but also in algebra, hydraulics, natural science, mechanical calculation, and even public transportation. He is said to have designed the first bus system in Paris. He, along with Fermat, is considered the father of probability theory. As a teenager he invented a calculator; he designed an early version of the roulette wheel; and he is also said to be the first person to wear a wristwatch.

His impact in math and science is reflected in the number of innovations that bear his name, including Pascal’s triangle, Pascal’s line, Pascal’s law, Pascal’s Theorem, and the Pascal distribution. And to honor his accomplishments his name was given to the international unit of pressure (equivalent to one newton per square meter), to one of the moon’s craters, and to a computer-programming language designed in the late 1960s. Here at the College we read his mathematical and scientific treatises in Sophomore and Senior Year.

Christianity and the Paradox of Man

By his early twenties Pascal was internationally recognized as a boy wonder; his genius was undeniable. He had met and corresponded with Descartes and Christian Huygens, among others. But what did he do with this worldly success and recognition?

Over a period of years that included several crucial moments of conversion, Pascal turned away from the fields of study that had won him renown to focus on spiritual and theological writings, most especially apologetics. He had experienced the lure of vanity and success. He had rubbed elbows with the young urban professionals who seemed more attracted by ambition and pleasure than by the call of the Christian God. He labored to reach them.

Despite publishing many influential scientific and mathematical treatises, Pascal won his greatest fame for the book of Christian apologetics that he never wrote. The Pensées, which we read in Junior Seminar, are fragments that he intended to work up into a book, though he died before he could do so. His prose is rich and vibrant, and the fragmentary nature of the work lends it an enigmatic character that invites wonder. The fragments are orderly enough so as to give a broad sense of his argument, and in one case a short section called “The Wager” is extremely clear and cogent.

I first want to say just a few words about the broad strokes of his argument, and then look at “The Wager” more closely.

Pascal views man as “a monster that passes all understanding,” a “freak,” and above all else, “paradoxical.” Man is simultaneously “judge of all things, feeble earthworm, repository of truth, sink of doubt and error, glory and refuse of the universe.” For Pascal this notion of disharmony in the human condition is especially apparent in our recognition that we are called to happiness but are at the same time inadequate to achieve happiness. It is only through Faith that we can make sense of these contradictions. “Man infinitely transcends man,” he writes; “without the aid of faith he would remain inconceivable to himself.”

But how can faith help us to understand ourselves? And what religion can do so? Pascal argues that if any religion can help, it will have to somehow deal with this most obvious fact of man’s existence. This ultimately leads him to suggest that, of all the great religions, only Christianity recognizes our greatness (we are called to be sons and daughters of the living God) and our baseness (we are all subject to concupiscence because of Original Sin). And Christianity provides a way for us to escape the difficulty and achieve happiness. So if there is a God, and He has provided a supernatural way for us to get beyond our monstrous predicament, this way is found in the Catholic Church.

But that presupposes that there is a God who cares to help us. How can we know that? Pascal is not interested in providing a proof that God exists. He thinks that such proofs are extremely difficult and will not work for the souls that he is trying to reach. He proposes another line of reasoning, which he calls “The Wager.”

Much hinges on the question of God’s existence. If He exists, then it is necessary to obey Him and honor Him, to curb our passions and live virtuously. If He does not exist, then we are left to our own devices, to pursue pleasure or happiness as we see fit. Which way should we go? Which way should we wager?

Pascal suggests that we must wager. At every moment of our lives, we behave as though God exists or as though He does not exist. Every moment we effectively choose. It is a game of chance, and so it makes sense to weigh the possible outcomes and the odds and the potential payout or loss. Pascal, in other words, proposes that we analyze the situation with the gambler’s sense of logic and calculation.

Pascal argues that the gambler’s calculation compels the gambler to wager that God exists. If you must wager, and the odds are even, there is no reason to choose one side or the other. The calculation then hinges on the payout. If the payout is slightly bigger on one side than the other, the prudent gambler would choose the side with the bigger payout. What if the payout is twice as much on one side as the other? In that case you would be even more strongly compelled to bet on the side with the bigger payout. But in the wager about God the payout is not merely twice as big, it is infinitely bigger since eternity hangs in the balance. And the bigger the payout is, the more compelling the calculation. So the infinitely greater payout carries infinitely more compelling force.

Prudence demands that we gamble on God. In Pascal’s words, “Reason impels you to believe.”

But where does that leave the nonbeliever? Can we really choose to believe because it is in our best interests? If you persuaded me that it was in my best interests to believe that Big Brother loves me, that still would not mean that I automatically believed it. Belief does not work like that.

Pascal therefore proposes that it is time for the unbeliever to clear away the impediments to faith. Undisciplined appetites and passions war against reason. By curbing the passions, the unbeliever can make room for faith. By submitting to the devotional practices of the Church, the unbeliever asks for faith, which God is surely eager to give. As a believer it is hard to know how persuasive the wager actually is to a nonbeliever, but it has certainly influenced many Christian philosophers.

A Final Act of Humility

Pascal lost his mother when he was only three. His father and two sisters doted on him. He amazed the world from a young age. It was difficult for him not to be distracted by worldly success. Ironically he was bolstered in his determination to resist vanity and stay committed to God by his association with a heretical community, the Jansenists of Port Royal, though they were not declared heretical until late in Pascal’s life. For a time Pascal became the public, albeit anonymous, mouthpiece for the adherents of Jansenius, attacking the Jesuits and defending Jansenist views of predestination and grace.

He was also beset with physical suffering. He is thought to have suffered from tuberculosis, stomach cancer, and brain lesions. His frequent headaches and illnesses helped keep human regard in an appropriate perspective.

Eventually Pascal experienced a strange personal vision or revelation that moved him to abandon the world and live for God alone. On the night of November 23, 1654, he experienced what he called “a night of fire.” He tried to put his experience into words on a parchment that he kept with him until he died. He wrote, “God of Abraham, God of Isaac, God of Jacob, not of the philosophers and scholars ... Joy, joy, joy, tears of joy ... ‘This is life eternal that they might know You, the only true God, and Jesus Christ, Whom You have sent.’ Jesus Christ. Jesus Christ ... May I not fall from Him forever ... I will not forget Your word. Amen.” Upon his death eight years later this note was discovered sewn into the lining of his jacket.

Late in his life Pascal found himself the determined opponent of Pope Alexander VII, who had condemned five key Jansenist theses; Pascal was convinced that the Pope had simply misunderstood the text. He argued bitterly to no avail; he even publicly urged Port Royalists not to back down. But with weeks to live, suffering excruciating pain from his illness and, perhaps more, from the medical treatments he endured, he faced up to the fact that he could not be a faithful Catholic and align himself against papal authority. He took the very difficult step of formally and completely submitting himself and his views to the judgment of Rome. He died on August 19, 1662, at the age of 39, having asked for and received the Last Rites.

May his soul rest in peace.