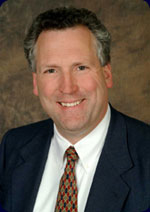 Having grown up in the forests of Washington state’s Olympic peninsula, Andrew W. Zepeda (’79) made a big leap geographically and culturally to attend Thomas Aquinas College.

Andy was an avid reader but became tired of high school. “I loved politics and history. Everything I thought was a classic I wanted to get my hands on.” One day his father gave him an advertisement about the College. Intrigued by the ad, Andy sent for the College’s founding document and became “totally convinced” he should go nowhere else.

He had never visited the College or even California, but he got on the plane to travel to enter as a freshman. “My mother thought it was absolutely crazy.” She became reconciled to the idea. All nine of her children have graduated from the College.

It was the best move of his life. “My College years were really happy years. I look back almost with envy. The hours of study — almost every class — were delightful. I never had any doubt this was the right thing to do. To meet all those people of like mind — interested, devoted to learning, to the Church — was wonderful.”

One of “those people” was classmate Anita Grimm, the eighth in a family of 17 children. Mr. and Mrs. Zepeda, married in 1980, now have 13 of their own. Anita’s additional stupendous accomplishment: She home-schools them.

Mr. Zepeda turned down several full-ride fellowships in the history of science before entering law school at the University of Notre Dame. Charles Rice, then its dean, was fond of saying: “Thomas Aquinas graduates are the best — period, paragraph.”

Mr. Zepeda was recruited to a 100-member firm in Los Angeles. But six months later, the firm broke up, and partner Bruce Lurie asked him to join a new firm. In 1988, Mr. Zepeda became a partner there, and in 1991 the name was changed to Lurie & Zepeda. The firm later expanded the name to Lurie, Zepeda, Schmalz & Hogan.

Apart from his demanding schedule handling commercial litigation, Mr. Zepeda has dedicated his talents to prolife causes, such as the pro bono defense of many defendants in the first Operation Rescue trials in Los Angeles. In 1989, he and other like-minded attorneys founded the Life Legal Defense Foundation to protect the rights of prolife demonstrators. That organization has now grown to a network of several hundred attorneys throughout the state and has won several important legal challenges. Mary Reilly, Life Legal’s administrative director, says: “Andy is just awesome. His brain, his generosity, his talent, are incredible. We need more attorneys like him.”

Mr. Zepeda also spreads his time over other worthy pursuits. He has served as Scoutmaster for a troop of home-schoolers, treasurer of the Newman Club, and lector at St. Therese Church in Alhambra. He was elected to the College’s Board of Governors in 1996.