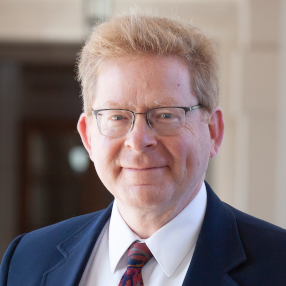 When 20-year-old Brian Kelly attended his sophomore philosophy class at Thomas Aquinas College in 1985, he never imagined that his tutor would one day be the College’s president and that he would one day be its dean. Twenty-five years later, however, Dr. Michael F. McLean, then a young member of the teaching faculty and in 2009 the newly appointed president, named Dr. Kelly to succeed him as dean of the College.

After graduating from the College in 1988, Dr. Kelly earned a master’s degree and a doctorate in medieval studies at the University of Notre Dame, where he studied under renowned Catholic philosopher Ralph McInerny, an emeritus member of the Thomas Aquinas College Board of Governors. During that time, Dr. Kelly worked as a research assistant at Dr. McInerny’s Jacques Maritain Center and as a teaching assistant. He also was awarded a prestigious Bradley Fellowship.

Upon completing his graduate work, Dr. Kelly returned to his alma mater as a member of the teaching faculty. “Coming back to the College was a kind of a natural fulfillment of what I saw as important,” he recalls. “It was important to learn the truth.”

His homecoming was also something of a dream come true. “I always saw the position of a tutor at Thomas Aquinas College as the best job in America because you get to pursue the truth in a way that is very fulfilling to the soul, with good people, and with people who already have a sense as to where the truth lies,” he says. “And I thought it was a way that I could make a difference in the world — one student at a time.”

Over the course of his years at the College, Dr. Kelly has served as assistant dean for student affairs, has taught in the Great Books Summer Program for high school students, and has served on a number of faculty committees, including the admissions and instruction committees. He held the position of dean from 2009 to 2017, at which point he stepped aside in order to return to teaching full-time.

Dr. Kelly grew up in Indiana and Illinois along with 13 older siblings, including his brother Rev. Brendan Kelly (’85), now a priest in the Diocese of Lincoln, Neb. It was while a student at the College that Dr. Kelly first met his wife, Karen (Stuart ’88) — a classmate in Dr. McLean’s sophomore philosophy section. The couple have six children and live in Santa Paula.