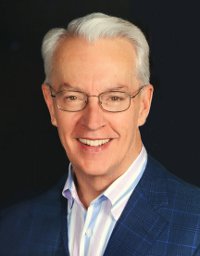 Throughout his life, Rev. Mr. Robert W. Andrews has put his talents to work for the service of others. When he was not quite 15 years old, his father died, leaving him to help care for his three younger brothers as well as his mother, who would fall ill only eight months later, and die five years after that.

“Economics were always a challenge in our household, especially with my mom’s health,” recalls Deacon Andrews, formerly the managing director of Cambridge Associates LLC in Menlo Park, California. During high school, with no time for sports or other extracurricular activities, he worked six days a week throughout the year to help support his family — and so continued all the way through college at the University of California, Berkeley, and business school at the University of California, Los Angeles.

While in graduate school he met his wife, Lisa, who was earning a master’s degree in finance. After marrying, the couple returned to San Francisco, and Mrs. Andrews left a budding corporate career to become a full-time mother to their children, Kirk and Lauren (’10), as well as an artist. Deacon Andrews, in turn, began a demanding career in finance, with work weeks rarely shorter than 50 hours and a calendar that included frequent travel.

Despite a busy schedule, however, he made sure to stay involved in the lives of his children. Indeed, it was when taking Kirk to his first-grade religious-education class that Deacon Andrews first became aware of Thomas Aquinas College, having met some fellow parishioners who were graduates, Rose (Teichert) and Dan Grimm (both ’76).

Intrigued by what he learned, two years later — when driving to Ojai to take his family and in-laws to lunch to celebrate their 50th wedding anniversary — he decided to pay the College a visit. It was 1993, well before the construction of most of the current buildings, and there was not much to see. “I think there were two buildings up. Everything else was in temporary structures,” he observes. “My father-in-law looked at me and asked, ‘this is a college?’”

Yet Deacon Andrews recognized the promise that lay beneath the College’s humble setting. “I admired the vision of the founders and the faith it must have taken for them to execute it,” he says. “I think it’s a great example of how, when you do what the Lord calls you to do, and you are aligned with His will, good things happen. For the founders to have the principles, the vision, and the faith, and to start off, as they did, with literally nothing, and to see what the school has become — I think it’s all the fruits of faith.”

When his daughter was looking at colleges and expressed an interest in studying the great books, he and Mrs. Andrews urged her to attend the College’s Summer Program for High School Students. Delighted by her experience, she enrolled as a freshman in 2006. Although she would leave after three semesters to pursue her dream of art school, she valued her time in the program, and her parents’ affection for Thomas Aquinas College only increased.

It was around then that Deacon and Mrs. Andrews first became benefactors of the College, joining the President’s Council. In 2008 they began attending the Great Books Summer Seminar Weekends, and they have been regular participants ever since. “To see learning that is based on reason, natural law, and faith was almost a revelation to us,” he says. “We realized that there is a whole world of education that most schools, regrettably, have turned away from, at least in my lifetime, and this is the very sort of learning that will lead you to truth.”

Now retired, Deacon Andrews fully devotes his time to the service of Christ and His church. Since 2004 he has been a regular visitor to the inmates at San Mateo County Jail, and in 2020 he was ordained to the permanent diaconate in the Archdiocese of San Francisco. He became the chairman of the College’s Bay Area Board of Regents in 2011, and since joining the Board of Governors in 2016, he has assumed a direct role in leading the College in the furtherance of its mission.

“Jesus is the Way, the Truth, and the Life. He has established the Church to mediate and bring His graces to the world,” says Deacon Andrews. “It follows, then, that schools that are faithful to His vision are going to have a curriculum, an environment, and a philosophy that are conducive to the growth of the whole person -- including spiritual growth, and the development of the gifts they have been endowed with to be a service to others and to meet their material needs.”

Thomas Aquinas College, he adds, is just such a school. “I view my involvement as a spiritual investment,” he says. “The young people who go to Thomas Aquinas College, with the lights of faith and reason, are being formed to go out into the world to witness to Christ. They will be part of a rebirth of what this nation needs.”