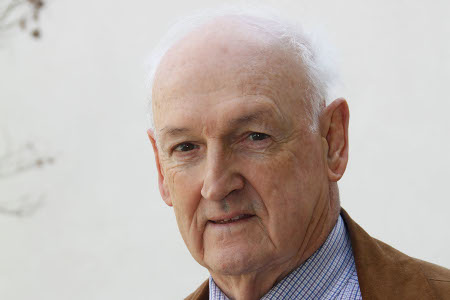 If founding a college is a Herculean task, then how fitting that one of Thomas Aquinas College’s founders would be an outstanding athlete-turned-philosopher.

Dr. John W. Neumayr, a four-year star basketball player at the University of Notre Dame, knew there were higher things in life than 10-foot circular rims. But he never anticipated that pursuing life’s great ideas would lead him to the founding of Thomas Aquinas College.

Born in St. Paul, Minnesota, Jack lived in and around San Francisco from the age of 10. The second oldest of four children, he always liked sports. He excelled at basketball in junior high and high school, and at the Jesuits’ perennial powerhouse, St. Ignatius Prep, he was selected to the all-city team in his senior year.

Jack also excelled at track and field. As a sophomore, he set the San Francisco City record in the high jump. His leap of 6’ 5” under the old “tuck and roll” method was thought by the legendary Stanford Coach Dink Templeton to be a world record for a 15-year-old at the time. (Surprisingly, Dr. Neumayr never improved on the mark. “My build changed and I gained 20-30 pounds,” he laments.)

Jack was delighted when, in 1948, Notre Dame recruited him for basketball and track. He had been hoping to go there anyhow. As a 6’ 4” small forward, he joined a team that remained in the nation’s Top 20 throughout his four years.

But it was during high school that Jack fell in love with philosophy. One of his fellow basketball teammates, Cappy Lavin, was a poet and scholar at heart, and the two young men began to see that there was something more permanent than the fleeting things of life. “We had spent a lot of time talking literature and philosophy before we even knew what philosophy was,” says Dr. Neumayr.

Jack cultivated this interest in philosophy at Notre Dame and, on graduation in 1952, decided to pursue a master’s degree in the subject there. He maintained his athletic interests, coaching the freshman basketball team for two years and playing in an exhibition league against visiting professional teams and the Harlem Globetrotters.

He returned to San Francisco uncertain of his interests. He pursued coursework toward a teaching credential, considered practicing law, and even tested a religious vocation at a Dominican novitiate.

During this two-year quest, his sister Mary introduced him to one of her favorite teachers at the San Francisco College for Women. Mary had guessed that her brother and her philosophy instructor, Dr. Ronald McArthur,would get along well. She guessed right. The two hit it off from the start. They played a lot of tennis and spent much time talking philosophy.

Dr. McArthur then joined the faculty of St. Mary’s, which featured an integrated liberal arts program based on the great books. Dr. McArthur, who taught in the philosophy department as well as in the integrated program, urged Jack to hurry and get his philosophy degree at Université Laval in Quebec, with the hope that the two of them might teach in the program there.

Jack thus studied philosophy at Dr. McArthur’s alma mater under his mentor, the esteemed Thomist Charles DeKoninck. But by the time Dr. Neumayr obtained his doctorate in 1962, however, winds of change were blowing at St. Mary’s, and Dr. McArthur counseled him to stay away. The program was losing its moorings.

For four years, then, Dr. Neumayr taught instead at nearby University of Santa Clara. There he found a soul mate in young philosophy instructor, Marcus R. Berquist whose brother Duane he had come to know at Laval. During this time he also met Bridget Cameron, an Oxford University graduate from England who was working on a master’s in American literature at the University of California, Berkeley. She finished the master’s and they married in 1963.

The winds of change were blowing at Santa Clara, too. In 1966, Dr. Neumayr and Mr. Berquist both migrated to St. Mary’s where it appeared there was hope for the reformation of the program there. But those hopes were soon dashed, and two years later, they, Dr. McArthur, and others began plans to establish a new college.

In the fall of 1969, Dr. Neumayr became as the first dean of Thomas Aquinas College. He assisted Dr. McArthur and Mr. Berquist in writing the College’s founding document, and drafted its first Student Bulletin of Information. He also traveled with Dr. McArthur to give talks about the College and to recruit students. And when the College finally opened for classes in 1971, Dr. Neumayr was an original member of the teaching faculty.

“When you consider the modest talents and efforts we brought to bear in founding the College,” he once said, “you have to conclude that this was God’s project, not ours.”

Dr. Neumayr remained Dean until 1981, and in addition to his full-time teaching responsibilities, served as a member of the Board of Governors since the College’s founding. He retired from the teaching faculty in 2016 and died on July 4, 2022.

“Jack Neumayr was a man who dedicated his life to education under the light of the Catholic faith,” said President Paul J. O’Reilly. “Along with the other founders, he had the bold vision to establish the College as a beacon of light during the confusion about education in the 1960s. He loved the Church, and he loved his students. He was a giant who will be sorely missed. All of us at the College pray for the repose of his soul, and the consolation of his family.”

All College
Dr. Neumayr: What Are the Liberal Arts?