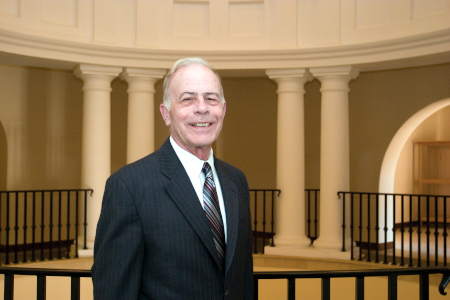 “This college simply wouldn’t exist if it weren’t for Peter DeLuca,” Thomas Aquinas College’s founding president, Dr. Ronald McArthur, once insisted. “I was the guy in the suit who would go talk to benefactors and dignitaries, but Peter was the one who found me people and places to go to.” Founder, senior tutor, business administrator, fundraiser, building supervisor, interim president — Mr. DeLuca has done it all in his five decades with the College.

In 1961 when he was a junior at St. Mary’s College, he was struck by an impromptu lecture delivered by a member of the faculty, Br. Edmund Dolan, F.S.C. “Br. Edmund was making bed-check rounds one night around 11:00 p.m. He came in and talked with my roommate and me about the disintegration of Western Civilization,” Mr. DeLuca recalls. “He started with William of Ockham and finished about two hours later. It was a moment of realization for us.”

Previously, politics had been Mr. DeLuca’s primary interest. He had helped launch a conservative club and was active in the Young Republicans. He had organized a large event to bring William F. Buckley, Jr., to campus.

But the insight from Br. Edmund — reinforced in lectures from Mr. DeLuca’s then-professor in ethics and philosophy, Dr. McArthur — led him to see that the roots of cultural disintegration were intellectual, not political, and that the remedy lay in education. The young student then decided he wanted to spend his life helping to defend and restore Western civilization.

Following graduation in 1963, Peter married Kay Roberts, a student from the San Francisco College for Women whom he had met in his junior year. He also became the western regional director for the Intercollegiate Studies Institute, where he coordinated speakers and events on educational matters at Western colleges. Two years later, he became ISI’s national director in Philadelphia, but was forced to return to Southern California the following year due to a family illness. There he worked first as a personal assistant to Henry Salvatori, the oil magnate and ISI benefactor, and then again as ISI’s western director.

Throughout this time, Mr. DeLuca remained in touch with his professors at St. Mary’s and with Dr. McArthur’s projects within the Great Books program there. DeLuca sought to give Dr. McArthur’s views an airing. He arranged to have his professor speak at the Western meeting of the Philadelphia Society, an ISI spin-off group Mr. DeLuca had recently helped form.

He then cultivated interest in Dr. McArthur’s prospective talk. Among those he interested was Doyle Swain, a fundraiser for what was then Pepperdine College. Mr. Swain met with Dr. McArthur and persuaded him to think about starting his own college. After McArthur and Berquist produced a draft of the new college’s founding document, Mr. DeLuca sent it to Henry Salvatori, who then made a gift of $10,000, the first seed money for the College.

The group then formed a corporation and used some of that money to host a November 1968 conference on the founding document, based on which National Review columnist Russell Kirk wrote an endorsement of the nascent school the following March. When the opportunity arose to establish a joint campus with the Dominican College of San Rafael in June 1969, Mr. DeLuca left ISI and became Thomas Aquinas College’s first employee, opening an office in an unused classroom on that campus.

There he helped develop a fundraising brochure and assisted Dr. McArthur in meeting potential benefactors. He also helped organize the kickoff fundraising dinner, and through various connections, engaged the celebrated Archbishop Fulton Sheen as a speaker.

Since then, Mr. DeLuca has been at the center of the College’s development. He often looks back in amazement. “If we had known then how difficult it would be, we probably never would have tried it. But we could see over the years the Hand of Divine Providence at work. We’ve always been conscious that this was God’s work because of the many things God did to make it happen. The whole is far greater than the sum of our meager efforts.”

Probably the hardest aspect of his job, early on, he says, was trying to run the business office without enough money. “For too many years, we were unable to pay our bills promptly. This is not something I did in my personal life, and I didn’t like to do that for the College.” Nonetheless, “eventually everyone was paid.”

Over the years Mr. DeLuca has worn almost every hat in administration, in charge at various times of the College’s business affairs, finances, fundraising, and development. In April 2009, when President Thomas E. Dillon was killed in an automobile accident, the College’s Board of Governors called upon Mr. DeLuca to serve as interim president, a position he ably held until Dr. Michael F. McLean was appointed as his permanent successor at the year’s end. “Mr. DeLuca led this college through a very difficult and trying time,” says Dr. McLean. “As always, when the College needed him, he was there.”

In spite of his lifelong contributions, Mr. DeLuca believes he has received even more from the College than he has given. Four of his six children have graduated from the College. “I have been a customer as well as a producer. I have all the same good feelings that other parents have because of that. In addition, it has been a tremendous honor to spend my life doing something so worthwhile and seeing it work. I feel as if I have been able to strike a blow in favor of Western Civilization after all.”