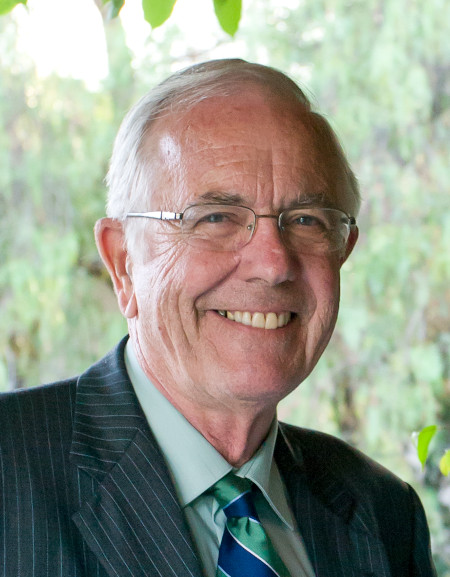 When R. James Wensley first came to know Thomas Aquinas College, it was as a seeker. A trained engineer and the retired CEO of the Capstone Turbine Corporation, his educational background was mostly technical in nature. The notion of a great books curriculum was foreign to him. Yet he found the idea intriguing; he wanted to learn more about it.

So over the course of several years, Mr. Wensley visited campus, attended some classes, got to know the faculty, contributed financially, and became good friends with then-President Thomas E. Dillon. Mr. Wensley first joined the board in 2005, became vice chairman in 2008, and served as chairman from to 2009 to 2014.

His journey, he concedes — from inquirer to chairman — was an unlikely one, but it was propelled by what he discovered during his many trips to campus over the years, especially his visits to the classrooms.

“In every class I walked into, no one ever even looked around to see me. They were so intent on what they were doing,” he recalls. The intensity of the students’ focus and their commitment to learning made him come to appreciate all the more the College’s classical curriculum and unique methodology, which is built around Socratic dialogue. “It was very inspiring to me to listen to the discussions and sometimes the debates. I was in awe of what I saw going on there and thoroughly enjoyed it.”

He likewise enjoyed getting to know the faculty. “I’m always impressed when I get a chance to talk to one of the tutors,” he says. “I think that the future of this school is really in their hands, and they seem to appreciate that fact.”

Mr. Wensley earned a masters of science degree in mechanical engineering at Purdue University in 1958. He then worked for 35 years at Hughes Aircraft Company, where he participated in the initial development of the United States space program. He eventually worked his way into management and ended his career at Hughes as vice president and the company’s first CIO.

In 1993, a venture-capitalist group asked him to launch a small, start-up company and serve as its president and CEO. Capstone Turbine was one of the first U.S. “green” companies, and it developed a small, turbine-powered, electric generator with no emissions and with an application for hybrid vehicles.

Retired since 2000, Mr. Wensley and his wife, Germaine, have 6 adult children and 10 grandchildren. “I consider myself a rather narrow engineer,” he remarks modestly, “and I’m trying in my advanced years to broaden myself with the College’s help.”