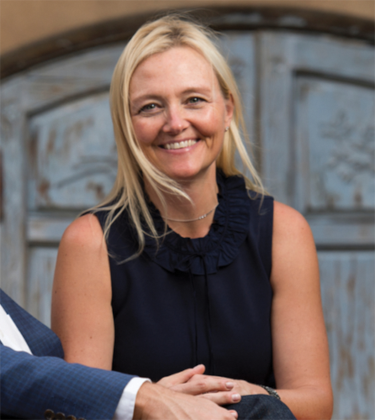 “My husband and I frequently tell others that we view TAC as providing the best Catholic higher education in the world,” says Martha Reichert, who was elected to the Thomas Aquinas College Board of Governors in 2020. Her admiration for the College is both theoretical and observed. She believes in what it stands for, and she has witnessed the good that it achieves.

As a mother and as a professional — Mrs. Reichert is the president emeritus of Endow, an international Catholic apostolate whose mission it is to educate on the nature and dignity of women — she is committed to forming young women of faith, leaders who are confident, well educated, and eager to serve Christ in the world. At the College, she has watched her daughters, Meghan (’18) and Nancy (’23), grow into precisely such women. “I have seen and indirectly experienced the product,” she says of the College’s academic program, and she wants others to experience it as well.

Mrs. Reichert’s support of the College, however, predates this experience. “Well before our daughters attended, I was an admirer of the founding and governing document, A Proposal for the Fulfillment of Catholic Liberal Education, which offers a model of clarity and sanity in a domain that has lost both,” she says. “Of late, I am impressed by how prescient the writers of the Founding Document were in writing about what they described as the ‘profound confusion’ afflicting most colleges and universities.”

A graduate of Franciscan University of Steubenville, Mrs. Reichert is a founding member of Endow’s board of directors, which she has served since 2003. She also developed and implemented the group’s outreach program to poor, homeless, and incarcerated women. From 2014 to 2018 she served as the organization’s president, a position that led to prominent speaking engagements at the Vatican, Legatus, and the World Meeting of Families.

Mrs. Reichert is additionally involved with several other Catholic organizations, including the Augustine Institute, Creatio, Katalyst, FOCUS, and the Missionaries of Charity. She resides with her husband, Tim, in Golden, Colorado. She enjoys hiking the Rocky Mountains, fly fishing, reading, and spending time with family and friends.