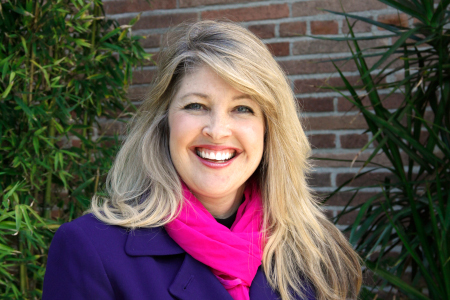 There are many reasons why Angela (Andersen ’87) Connelly has “a passion,” as she puts it, “to promote Thomas Aquinas College.” She is an alumna who considers her time on campus to have been “an intellectual, emotional, and spiritual high.” Her eldest daughter, Catherine, is a member of the Class of 2011. And Mrs. Connelly has seen, in a very personal way, how the College prepares its students for life both in this world and in the world to come.

When she came to the College in 1983, Angela met up with a fellow freshman and former childhood acquaintance, Jon Syren (’87). “He was immediately my soul mate,” she recalls. The two went through the program together and married shortly after graduation. When Jon applied to medical school, Mrs. Connelly remembers, his alma mater was one of his strongest assets. “Every interview revolved around it; it was very attractive to the medical schools.”

Tragically, during his third year of medical school Jon was diagnosed with non- Hodgkin lymphoma and died shortly thereafter, leaving Angela and two small children behind. “The College prepared him so well for his death; he was so ready, even though it was so hard. He knew God. He knew beauty and goodness. I can’t imagine a more practical purpose,” she says. “And given the Communion of Saints, he is so with us. He is with Catherine and Joseph all the time, and I know he is with Thomas Aquinas College.”

In 2004 Angela married Jack Connelly, an attorney in Tacoma, Wash., and the couple has since been blessed with seven more children. They are enthusiastic champions and generous benefactors of the College, having hosted receptions at their beautiful Puget Sound home. They are also involved in numerous civic and Church organizations, for which Mrs. Connelly has served on several boards. “But there is a difference when an organization represents your deepest passions, and you can just assent intellectually and with your will to loving and supporting the mission,” she says. “Thomas Aquinas College is a firsthand experience for me that I know to be true and good, and it’s an amazing joy to help.”