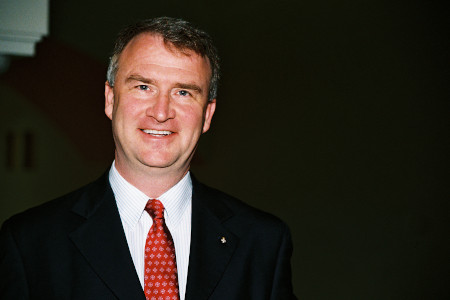 Michael K. Grace is a partner in the Los Angeles law firm, Grace & Grace LLP, which specializes in intellectual property and business litigation. He previously headed the intellectual property practice groups in Los Angeles at Latham & Watkins and at Greenberg, Glusker, Fields, Claman & Machtinger, LLP. He was elected to the College’s Board of Governors in October 2004.

Having himself received a B.A. with high honors from a great books program at James Madison College of Michigan State University, Mr. Grace says, “It is plain to me that an education based on the great books is an education for life, and that a technical education should be built on a liberal arts foundation.”

Mr. Grace is a member of the Board of Directors of the Sovereign Military and Hospitaller Order of St. John of Jerusalem (the Knights of Malta) Western Association U.S.A. and chairs its Membership Committee. He is also actively involved as a board member of the Passionist Retreat Center.

Michael’s wife, Cecelia, is also a partner at Grace & Grace; they reside with their three sons and one daughter in Pasadena, California.