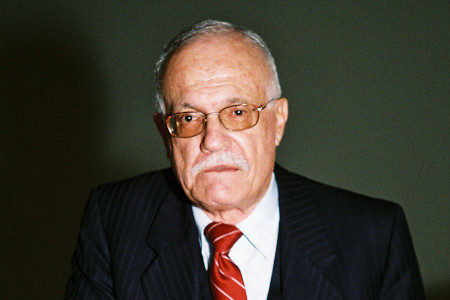 “When I was in College, I used to be on my knees in the chapel begging God to let me be a philosopher,” says Dr. Henry Zeiter. “But my father said, ‘You need to get a life, then you can be a philosopher.’” Dr. Zeiter got a life. In fact, he became one of the nation’s foremost eye surgeons. And he also became a philosopher. Nearly everyday, he goes home, turns on his classical music, reads a little of John of the Cross, Teresa of Avila, or Thomas Aquinas, or dabbles in watercolors.

Dr. Zeiter is Lebanese, but his family roots were in Stockton, California. In 1898, during the Spanish-American war, his grandmother traveled there from Lebanon to peddle small goods so she could support her five children back home. She made money, retrieved her family from Lebanon, and settled in the region. One son wanted to be a poet. He was pumping gas one day when he realized, “You can’t make a living as a poet in the U.S.” He sold out before the Depression and went back to Lebanon where he became a recognized writer and gave the funeral oration for the Arab world’s greatest poet, Kahlil Gibran. He also fathered seven children, the youngest of whom was Henry.

In 1948, when Henry was 14, his family moved to Venezuela to be near family. Henry graduated from high school at age 16, and his father sent him to Assumption College in Windsor, Ontario, near other relatives. There he fell in love with the great books and the philosophy of St. Thomas Aquinas. It was also where his father impressed upon him the need to do something practical with his classical education.

Henry excelled in medical school, graduated as a wunderkind at age 23, and did his residency in Detroit in ophthalmology. In 1962, he relocated to Stockton where so many of his secondary family were living and became the founder and president of the Zeiter Eye Clinic Surgicenter.

Dr. Zeiter’s innovations in cataract surgery made him famous and soon ophthalmologists from around the country were beating a path to his door to learn about his techniques. Over the next 35 years, he would perform more than 30,000 operations for cataracts, glaucoma, corneal transplants, and other disorders of the eye. He became widely published in refereed journals, belonged to a host of prestigious medical associations, was elected President of the San Joaquin Medical Society, and gave clinical training throughout the world.

But Dr. Zeiter always saw medical knowledge as a good that must be shared, not just in the United States, but in poor areas of the world. For more than 15 years, he served as a visiting surgeon with Orbis Eye Missions in the Far East, performing eye surgeries and training local surgeons. He did the same in Bulgaria and in his native Lebanon, where he worked with the head of the medical society and the American University to set up a surgical demonstration project through the American University in Beirut. He set up a charitable association in one of the villages to help cover medical supplies and surgeries for indigent people.

But that is only half the story. While he was doing his residency training at a Detroit hospital, he met Carol, a young nurse who was working towards her master’s degree in pediatric nursing education. He thought he would test her mettle by taking her to Verdi’s Requiem on their first date. “It turns out she knew more about it than I did,” he said. She also told him about her penchant for Thomistic metaphysics. On that first date, he pronounced, “I’m going to marry you.” She said, “You’re crazy — you’re not even in love!”

Of course they fell in love, and they did marry, and Henry uprooted Carol from her native Detroit to Stockton, where they raised four children. But Carol never was idle. While her children were in school, she obtained a master’s in counseling and psychology from the University of the Pacific and then launched a 20-year career as a marriage, family and child counselor. She retired in 1998, having counseled thousands of people on the gamut of life’s most troubling issues. She would often reap the fruits of her efforts when people would stop her years later and say, “You’re the one who saved my marriage.”

Together, Dr. and Mrs. Zeiter have established a homeless shelter in their names, and they direct a charitable foundation that provides scholarships for needy students. They were also the driving force behind the Stockton Chorale and Chamber Music group, which was on its way out until they undertook to bring it back.

In 1986, Dr. Zeiter was elected to the Board of Governors of Thomas Aquinas College, where he serves as chairman of the Committee on Academic Affairs. In 2010, in honor of their decades of generosity to the College, he and Mrs. Zeiter were inducted into the Order of St. Albert.

Q. Have you always been serious about your faith?

Yes. I was born Catholic from the Maronite section of North Lebanon and can trace my Catholicism to the Apostles. God has been most kind to me. I’ve never doubted my faith. My most memorable day was my First Communion.

Q. People say you live a highly structured life. Is that true?

St. Thomas says, “To know is to order.” I don’t think you can lead a decent life without being organized. No one should ever have to reinvent any wheel. I found a schedule that works, and I try to stick to it. I try to make time for leisure. Leisure is a wonderful thing. How can you listen to Beethoven or Bach without thinking about God? How can you deepen your spiritual life without having the chance for prayer and contemplation? You need good books to live a good life. And you need time, so you can read good books. And you only get time if you schedule for it. It’s hard, I know, but you’ve got to do it.

Of course, I realize that you have to make a living first. You just need to realize that money is not that important. I can see it, love it, and dismiss it, because I know that life is more important than a career. I’ve never seen a U-Haul following a hearse. It’s OK to be a capitalist but only so long as you’re a philanthropist.

Q. How did you find out about the College?

Completely providentially. When Suzie [my daughter] was in high school, she was getting all sorts of college literature in the mail. One day I got the mail, and I saw this Bulletin from Thomas Aquinas College. I opened it up and read it and said, “This is a dream I’m having. This cannot be true. There is no such place. But just in case there is, I’d like my daughter to go there.” All I had to do was see the courses and the books, and I could tell what it was all about because I had done the same on a somewhat disorganized basis as an undergraduate.

But I knew the only way I could get her to go there was to say nothing. My daughters are notoriously stubborn. So I never said anything about it. Then Suzie says, “Daddy, there’s this College called Thomas Aquinas — you know, my confirmation name — and I want to look into it.” I said, “Oh, that’s nice, dear.” And then I said to myself, “Oh, thank you, thank you, Lord!” Then, Tom Susanka [then the Admissions Director] came for a visit, and the rest was history.

Q. You still keep up your reading?

Of course. I specialized in ophthalmology because it was limited to only one organ in the human body. I knew I could master it quickly and then spend the rest of the time with philosophy. I read constantly. I love St. John of the Cross, St. Teresa of Avila, Etienne Gilson, and Garrigou-Lagrange. I love Jacques Maritain’s The Degrees of Knowledge, and Karol Wojtyla’s doctoral dissertation, Faith According to St. John of the Cross. What masterpieces! I also love the Stoics. They make you patient with the turns of life. They are calming. I need that. I’m an excitable person.

I just entered the Third Order of Carmelites and am really involved with St. Teresa right now and with the rules of the Carmelite order. It’s wonderful!

Q. What do you see in the future of the College?

It’s going to stay around for a long time because the need for it is extreme. Anybody who recognizes the value of the College can’t possibly work enough for it or give enough money to it to keep it going. These young people are going to be very important in the re-Christianization of the United States. It’s the only College that teaches Western culture in its totality and that’s important because Western culture and Catholicism are inseparable.

Q. What is the biggest challenge presented to the College?

I love Thomas Aquinas College. I just love it. I love everything it stands for. How can I not help them? It stands for everything I ever believed in.